Subaru Outback traveling, ATC Bobcat on Tacoma in the past

I recently used my camper as a cheap motel for an early flight out of Sacramento to Atlanta. I stayed at Rancho Seco, a SMUD (utility company) recreation area. $20 a night is much cheaper than a motel room for sure. But it was raining cats and dogs, serious deluge. So I used my time to inventory and document.

My couch functions as my kitchen storage. The end closest to the door contains these things: 3 dish tubs, one for storing a variety of utensils and lids, the other two for washing dishes. Lift the tubs out and you get

2 cast iron skillets, stainless steel coffee pot with a Stanley mug/pot inside, a SS thermos for cooking oatmeal, etc. overnight, a small 2 pot set from Wal-mart, an ove-glove to lift hot cookware, a waterbottle with a Simple shower head attached to minimize water use while bathing or dishwashing, a turkey baster (new, not sure it will stay in, but something I cooked recently would have been easier if I had one, so…), the floral at the edge is a stainless steel BBQ grate, and the paper wrapped thing is that ax tool I bought at an  antique store. Need to wrap it because it is sharp.

I have 2 loaf pans and binder clips to create an oven like contraption on the stove. A juice jug for making orange juice from a can, two extra turnbuckles because you never know, a baggie of zip ties, a hank of rope, and the purple thing turns my Thermarest “headboard” into a chair. I have started leaving my chair at home sometimes since I so rarely break it out, but I want to have a back up in case. Under that is a cheap grill thing where you sandwich something in between the two wings and cook it over a fire. Haven’t used it yet, but you never know.

So standing on the ground, I can lean in and reach all this. The refrigerator is on the opposite side. I usually have to step up on the hitch step to reach inside, but don’t have to get all the way in.

I try to organize what I am going to need before I get out. The stove is mounted all the way on the front wall, so I have to get it out first. Then put the back couch cushion on top of the front one, so I can access the “kitchen”. Anything needed from the red ice chest staples pantry (critter proof) comes out, and if no picnic table the ironing board.

The other half of the couch is mostly battery. The Omaha steak box protects the connections to the solar charger and 12V outlet from shifting contents. 2 gallons of water, a syphon hose, a water bottle with a stainless steel cup on the bottom, my rain poncho, a small shovel for waste burial if boon docking, white face cloths for sanitation if no shower available. The blue pole is for sleeping on the floor with the couch seat cushions to level them since they have a wooden chunk permanently attached on the back. The couch as designed by ATC feels a little wobbly, so I would sleep on the floor if I couldn’t pop up for some reason (stealth). I may just pull the folding legs off the vertical couch pads since they keep the couch back from tilting back at a comfortable angle. I need to look at how they are attached.

No picture of the middle of the couch, but it has a bag with my snow chains (may move them to a turnbuckle area since they can get wet, but haven’t yet), a tarp and 4 tarp poles from an old “dining canopy” to create an awning if I stay in one place long enough to need one, and a bag of towels and emergency supplemental clothing.

So you can fit an awful lot in those couches. I did notice when I was pulling things out and inventorying that some of the screws holding the couch together at the floor level have pulled out. I guess it isn’t designed to withstand cargo shifting. The support in the center where the two couch cushions meet has also lost some screws and stability. Will need to reinforce that before I fall in. (Edit: when I took the ATC into the factory to have the solar mounted on the roof, they had to access this area for battery connections. They noticed the screws missing and beefed it up without being asked to. I just can’t say enough about the post purchase customer service provided by ATC. They are AMAZING!)

After Death Valley, I headed south. I was tired of the crowds of flower watchers. I will come back to Death Valley some other time, but it was nuts!

I haven’t been through Baker for thirty years or so. Wow had it changed. Neither of these two “landmarks” were there before. The wacky things they will do to attract tourists. 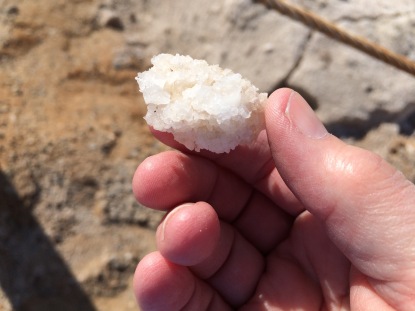 On the road from Amboy Crater to Joshua Tree there are Salt evaporation channels that are the most amazing turquoise color. Not sure what the process is, but it was an interesting view. 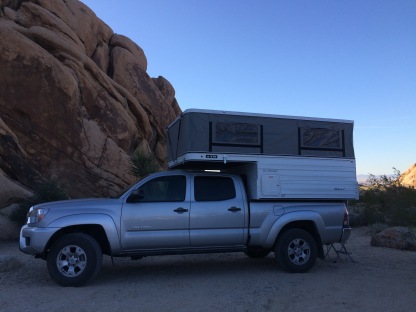 I camped in Indian Cove Campground. It is in Joshua Tree, but not on the main tourist road. It is between 29 Palms and Joshua Tree, so close to civilization, but the sites are well spaced with rocks between most, so it feels very private, although still in a crowded campground. I am not quite ready to make the break to true boondocking, but the over use of generators may be rapidly pushing me towards it. And there was an annoying drone flying overhead. That was an invasion of privacy and probably illegal as well, but not worth the trouble to protest. I chose a well shaded site, since I arrived at 2:00 and it was warm.

Even though I was close to civilization, I felt like cooking again, but wanted breakfast for dinner. I hate making that kind of mess in the morning when itchy feet are begging to leave and hit the road. But it is perfect at night. Spent the next two days visiting my parents in Long Beach and a college friend in Ventura. All in all a nice little get away trip. I made the mistake of mentioning to my mother that I wanted to buy a 12V compressor fridge (Engel, ARB or Dometic) but my husband says you can buy an awful lot of bagged ice for what they cost. She asked how much, so I shouldn’t have been surprised the next day when she gave me an envelope with 5 crisp 100 dollar bills. Pushing 60 years old and the parents still spoil me. My husband spoils me too in letting me go without making me feel guilty. He’s just too much of a homebody. I tell everyone the ATC is just perfect for one, you have to be “really close” to fit two in there comfortably.

One shouldn’t start their trip with a camper shell this dirty, but the California Central Valley is a buggy place. Pulled in to Red Rocks State Park off Highway 14 as a possible camp spot, but for $25 a night they were just too close together and blah for me.

Went on up the road to Fossil Falls BLM campground and pulled in just at dusk. Got the last site and it was perfect. And free! Saw my first wildflower, with many more to come.

Got up early and entered Death Valley through Panamint Springs. What a dramatic way to enter the park. Glad I wasn’t towing a vehicle down that decline though. Love my ATC!

I need a better camera than my cell phone, but the flowers were amazing.

I don’t know what this orange growth is, but in college (many years ago) my roommate draped it over her head as a wig. I was still too clean to attempt that! 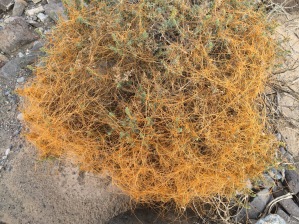 I drove out to Aguereberry Point, which was not too bad a gravel road. I didn’t go all the way to the top, but far enough to get the overlook into the Badwater basin. The tip of the antenna in the second photo is where I was at Aguereberry Point from down on the flats at Badwater.

Obligatory Badwater photo. Artist’s Palette is an amazing drive and I was glad to do it in the late afternoon to get a better contrast. The clouds also helped with contrast too. 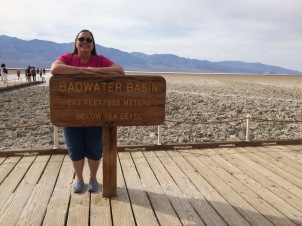 I had seen this gal out scrambling the rocks with her boyfriend. Not the usual attire for Death Valley. Must have been a day trip from Vegas.

Got an edge site at Sunset campground. I need to come up with a better “campsite reserved” system. My site was stolen again even though I had the tag posted on the pole. Fortunately the site next door was open and equally good (ha – they are all about the same, kind of like parking in a drive in theater only level). 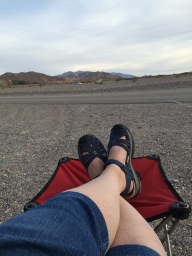 A fellow Wander The West member wandered by and said, ”You must be Bseek?” I feel a little famous, or is it just a small, tight group? Anyway it was good to put faces to the code names from the forum.

I decided to cook dinner since the Resort was so expensive. They know they have you over a barrel since they are the only game in town. I am refining the system to cook on the ironing board, and everything is accessible in the camper from the ground level. Ice chest on the bench to the left, floor as a staging area, and pot & utensil storage to the right under the couch. See the black and silver object just above the California map? That is my 12V RoadPro oven. I made cookies (well baked them anyway). I pulled a few frozen dough globs from home and baked them in camp. Yum! Since it gets dark earlier in the winter, it is nice to have the rear LED lights, although they are a little too bright for neighborliness.

I have made four improvements to the sleeping compartment since my last trip. One was putting a sheet on the mattress. Much nicer. Second, I use a Thermarest camp pad as a headboard. Keeps my hands and head much warmer since I don’t have the Arctic Pack option. Third, I covered the vent with a reflectix pad using a few command picture hangars. They are like Velcro that sticks together, but can be separated easily. And if it doesn’t work, you just pull on the command strip and it releases cleanly. Insulation and darkness since the cover is transparent. And the most controversial change is that I mangled out the rivets on my lifter bar attached at the top of that shiny silver frame on the wooden panel. I was just so dang tired of bonking my head on it. It really opens up the space, and since I am the only one lifting and lowering, I know to be careful to keep it engaged in the holes when lifting/lowering. I wouldn’t do it unless I had the exterior lifting shocks to keep the roof up. I may rethink it if I get into any howling windstorms, but for now it is a big improvement.  (before and after)

I’ll leave you with this hint of where I went next.