Subaru Outback traveling, ATC Bobcat on Tacoma in the past

It was a rainy beginning, but this was the timeframe I had allotted to go, so I headed out anyway. I stopped at Sims Flat off Highway 5 between Redding And Dunsmuir, near Castle Crags State park. $15 a night at the USFS site is better than $35 a night at the state park. I was the only one there on a Saturday might. My, the benefits of off-season travel. But it was supposed to be a wild and wooly storm. So I picked the site least under the trees, and prayed a lot. The thunder was loud, but only lasted 20 minutes or so. The train horn was actually much more of a nuisance. The Sacramento River was flowing mightily, a reassurance that the drought just may be over. One can only hope.

I knew it was supposed to rain all day, so I was hoping that by heading to the desert side I could at least lessen the impact. The next morning I crossed over 89 at McCloud towards Lava Beds NM. This was Lower Falls on the McCloud River.

I pulled off the road and followed a FS road towards Medicine Lake, passing Jot Dean Cave. No way I was going to go in alone, but it sure looked interesting.

When I got to Lava Beds, it was still raining a bit, and the only really interesting thing to do there is go into the lava tubes. Again, I wasn’t going to do that alone. Also, since I had recently been in a cave in Arkansas, they would have had to decontaminate me for white nosed syndrome (http://www.nwhc.usgs.gov/disease_information/white-nose_syndrome/) which is prevalent in the eastern half of the country and they are hoping to avoid its spread into the western bats. So I just drove right through.

I hit Klamath Falls for a late lunch and did some shopping. By the time I headed out it was getting time to find a campsite. I headed up highway 66 towards Ashland, but the campgrounds I passed were closed for the season. I went down a dirt road to Topsy Lake BLM camp, but it was closed. One the way back out I noticed several fishermen’s access points off the road. I decided to do my first official “boon docking” experience. That was a huge step forward for me. But it was getting late, I had driven quite a bit and there wasn’t anything else to head towards. I was well off a seldom used road that I hoped was still on BLM land. It was actually a beautiful site, level with a wonderful view out the doorway.

The next day was a slow wander through lower Oregon. I didn’t make great time because I did quite a bit of shopping. I ended up at Valley of the Rogue again. I guess I needed the tried and true old faithful after my adventurous night before. Plus it was time for a guaranteed shower opportunity.

Down the 199 through Jedediah Smith Redwoods Park. The sun came out the minute I crossed the California border. I decided to try for Gold Bluffs Beach in Prairie Creek Redwoods. It is 6 miles down a 15 mph dirt road, through glorious old growth forest, dripping in ferns and mosses. Then you break out into the beach and go another 2 miles to the campground. Wow, just beautiful. There are 20 sites, but only about 5 were filled that night.

I saw an older FWC that had an interesting bike rack and way of turning the jacks sideways for travel. Very clever. I can’t carry the extra weight on my Tacoma, but for others it might be a good compromise between driving with them on, and down, or left behind. 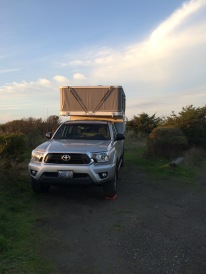 Roosevelt Elk were everywhere. And some arty-fartsy shots I took with my cell phone. 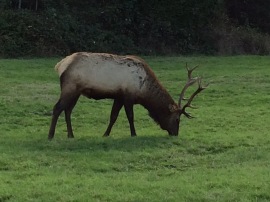 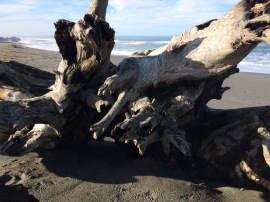 I stopped at the Fort Bragg marina and had shrimp and chips at the SeaPal dockside. They were plump, juicy and delicious. 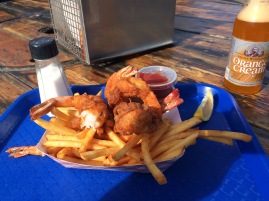 Then I headed up Navarro River towards Boonville and home.

Somehow I picked up a little decoration. And stayed at Hendy Woods State park. They wanted $40 a night, and I told them it was only $35 anywhere else. But not too many options there either.

Then I went to the Charles M. Schultz “Peanuts” museum in Santa Rosa. It was very well done, but my favorite was the cartoon strips even in the bathroom. 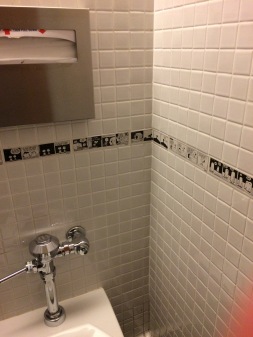 So a nice, simple get away. I didn’t come up with any new storage techniques for the camper, so that must mean I am finally settled in.

I took a little beach break last week and stayed at New Brighton State Beach near Capitola. The sites are pretty open and not very private so I pretty much rolled out of bed each morning, shut her up and took off for interesting places, usually pulling back in after dark. I LOVE how easy it is to set up the ATC. Pop six latches and lift twice.

Since I had the hang tag for a state beach, other parks let me in the gate for free and I used the opportunity to check out every little state beach and park I have never been in before. I drove down Highway 1 to Lucia because I wanted to check out Kirk Creek Campground that everyone raves about. It was pretty nice, but it seems it is now on a reservation system, not first come, first served like I had been led to believe. I took pictures of my favorite sites for future reference. The coast line was fabulous, but the weather was not the best. I was trying to beat the rain, but it was building up in the skies.

One of my absolute most favorite places is Julia Pfeiffer Burns State Park. The gorgeous cove with a tiny waterfall is spectacular. Good to see it still had water even after the drought. 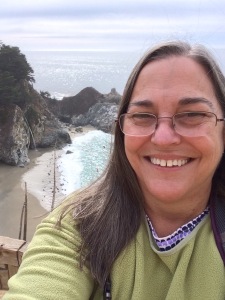 My Bobcat patiently waiting my return from interesting places. 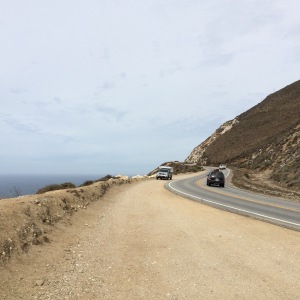 So even though I brought the full cooking kit, I found too many wonderful reasons not to cook. The fruit stands were still open and the fried artichoke hearts were heavenly. Zelda’s on the beach in Capitola has a $13.95 lobster night on Thursdays. Yumm. 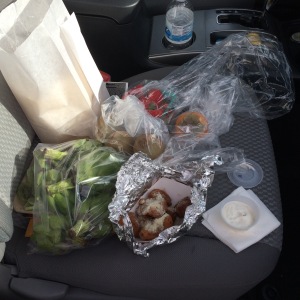 I spent lots of time just soaking in the sound of the waves. I could hear it from the campground at night, but could also hear the freeway and sirens. Mixed blessing of camping so close to civilization. It rained as expected the one night and I loved the sound of it pitter-pattering on the aluminum roof. The Santa Cruz kids were having a little pre-Halloween fun with their surfing idol.

I have gotten things fairly well stowed by now. I learned if I move the Action Packer back farther on the bench it is corralled from sliding off by the step stool that I have velcroed in place near the back door, and if I keep a small box by the back wall it keeps the lights from being accidentally turned on. I made a vlecro strap that keeps the ice chest from sliding too much. 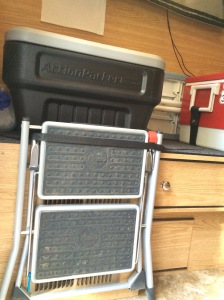 The greatest tool has been a strip of hook velcro with a hole punched in it, and a shoelace threaded through. I then use those to tie the various “pseudofabric grocery bags” that I pack in so they don’t tip. ATC put a strip of fuzzy velcro all around the top for their “cold weather pack” but since I didn’t get that, I have found other uses for it.

I used to keep the folding chair on the little shelf under the window, but have discovered it works better on a trip to line up the bags of food and clothing instead, less shuffling around once I arrive. The couch has enough of a lip on it that it keeps the bags in place. I bought a bungie cord to keep the folding chair on the couch in transit.  I just ran the bungee under the support for the couch, it’s not attached, but works. The chair still rides up on the shelf when I am not on a trip though. 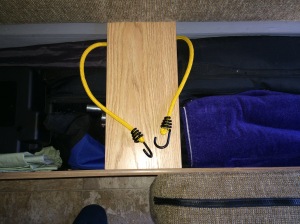 And I discovered it fits well vertically in the back corner once I am popped up. Perfect for rainy nights when I don’t want it getting wet or stolen (it is a Strongback and those things aren’t cheap, but worth every penny).

I also got my potty box and stove strapped up against the wall so they don’t slide around. 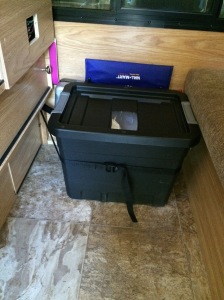 I saw my first ATC sighting while driving my ATC at the entrance to New Brighton. I waved but didn’t get a response. They couldn’t have been WTWer’s or I know they would have been more friendly. That reminds me, I have to put on my WTW decal so others will know a kindred spirit when they see it.